The trail continues to our representation of the colonial garden.

The colonisation of WA began in 1829.  Most colonists came from the UK, but there were also people from other places, and some of the colonial market gardeners in the area were Chinese.   In the MRIS garden, the plants are imported mostly from Europe and represent the period from 1829 to World War 1.

The nearby townsite of Augusta was inhabited by colonists in 1830.  The colonists, including the Bussell, Turner and Molloy families, had to rely on their own resources for food.  Ships were few and far between and often didn’t arrive when expected, meaning people went hungry.

Jim Turner’s cellar and fig tree can still be seen along Albany Terrace in Augusta.  The cool cellar may well have been used to store foodstuffs to keep them fresher.  There is a plaque in a park on the riverside marking the site of the Molloy Homestead.

Georgiana Molloy has become famous for her work as an amateur botanist, heading out into the bushland and forest collecting seeds and pressings to send back to England, often accompanied by Wadandi-Pibelmun people.  She loved gardening and kept a vegetable garden for kitchen use. Many of her letters and other materials have survived, and can be read in three different biographies.

“We can almost picture the garden she had in mind, a riot of colour and soft planting, when she asked Mangles to send her seeds of ‘foxgloves, dahlias, larkspur, veronica, clover, pinks, petunias, large ornamental poppies and variegated geraniums’.” http://georgianamolloy.com/the-botanical-desiderata-of-georgiana-molloy/  accessed 15/06/22

The Bussell family moved to Ellensbrook at Mokidup in 1857.  The homestead was managed as a dairy farm and they also grew vegetables in a large fenced area which can be seen in historical photographs.  The closest place they could buy food was at ‘The Vasse,’ now known as Busselton.  They need to survive mostly on what they could raise themselves.  Still, potatoes and beets were grown especially for the cattle!

Today Ellenbrook is managed by the National Trust.  The current caretakers noted the amount of wildlife that lives there now, and that a major issue for the colonial growers was keeping kangaroos and possums from eating the produce.  Heavy-duty fences made of hand-cut jarrah were used to exclude animals from the vegetable gardens.

Although the gardens at Ellensbrook have long gone, you can still see the old mulberry tree, and there is a grape vine that may be the oldest in the region and there is a legend that it was planted by Ellen Bussell in the 1850s.

Our garden is loosely based on an image of the Boyanup School garden of 1906, which won the best school garden in the State.  Colonial gardens were typically planted directly into the soil whereas our garden has limestone walls to provide seats and a meeting place for the various year groups.

Consider/ask how the concept of place has links with food and how we eat.

Imagine arriving in a place where all the plants are new to you.

Consider/ask how the ‘season’ links with what food the Colonialists had to eat.

Consider/ask how health was maintained.

Consider/ask how this knowledge was shared and maintained. 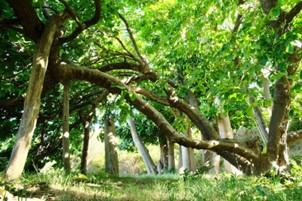 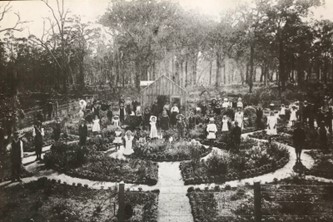